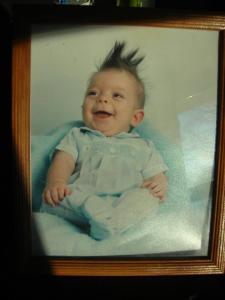 My mom always said it wasn’t your own birthday that got to you – it was your kids’ birthdays. My little baby boy turned 21 last week. I had a birthday a couple weeks before that, and it really didn’t seem to faze me one way or the other – but looking at the young male adult before me was something different. Like most parents, it seemed just the other day that he was a wild-haired, bright-eyed, rosy cheeked little toddler exploring anything and everything within reach. And now he’s officially an adult. Yes, he still has a little more than a year of college left, and I will do whatever I can to be a support in the coming years as he tries to establish himself, but he is officially an adult.

The next day I had lunch with a former college student of mine. I have been a college minister for almost 17 years, and catching up with former students is one of the true joys in my life. This incredible young woman is in her first year of navigating life beyond college. We discussed how things were and her plans for the future. It’s a truly exciting, but also nerve-wracking, time in one’s life.

As I thought about these two people for whom I care so much making the transition to adulthood, I remembered one of the best known verses of the Bible, found in 1 Corinthians 13:11. “When I was a child, I spoke like a child, I thought like a child, I reasoned like a child; when I became an adult, I put an end to childish ways.” This letter is written to a community that is terribly divided and fighting over a wide variety of things, both big and small. In many ways, they are acting like immature children. The letter reminds them that when we try to live in God’s Spirit, we grow up. We firmly place childish behavior in the past, and learn to live as mature sisters and brothers.

Now, my brother and I still like to pester each other, even though we are decidedly middle-aged. Sisters and brothers are still sisters and brothers, even when they are adults. They are different. They view the world differently. They engage with others in different manners. They are their own independent people. Yet, no matter how they might differ, a true sister or brother will always be there for the other. While growing up, I could pick on my little brother, but woe be to anyone else who decided to do that.

Growing up doesn’t suddenly mean we have all the answers. It doesn’t mean that we don’t have differences with each other – sometimes very deep divisions. It doesn’t mean that we live in a world of rainbows and happily ever after. It does mean we are mature enough to meet the challenges of the world, and to engage with others in a respectful manner. It’s great to see my son, and my former student, put the childish things of the world behind them, and firmly grasp the things of adulthood. I become so frustrated and discouraged when societal and political leaders act like children and refuse to find ways to work together. One wonders if anything productive can ever come out of our nation’s Capitol anymore. I hope and pray that our church, and our society – both so badly divided and so often childish – can follow the example of the children who are becoming adults in today’s world. And a little child shall lead them.