I clearly remember one of the worst days of my career. 9 years ago I sat in the auditorium of Lake Junaluska Assembly, gathered with all the ordained ministers and laity representatives from my annual conference of the United Methodist church for our yearly meeting. I had practically grown up at Lake Junaluska. My grandfather had been a minister for many years and had essentially been my dad until he died when I was 10. Some of my earliest memories were walking around the Lake with him, and feeding ducks while he “conferenced” with his colleagues. It had always felt a safe place – until that sunny afternoon.

A lay person stood up during the conference budget discussion, and read a letter that had been given him by the Institute on Religion and Democracy (IRD). He demanded that funding be withdrawn from the United Methodist campus ministry I served, because we were a Reconciling Ministry and were “promoting homosexuality.” The Bishop dealt with it in a very professional and efficient manner. Meanwhile, all eyes in my vicinity turned to me. I wanted to sink into my seat, but I knew it was important to sit tall, so I did. I held my countenance for the next hour or so until a break came, and then I quickly made my way to the back side of the auditorium where a small private deck overlooked the Lake. The conference treasurer found me. He was an older man I had known for years, but not known well. He and the Bishop had received a letter from the IRD the previous month, so they had prepared for the possibility. The IRD had targeted 5 Reconciling Campus Ministries – one in each jurisdiction – and mine was the only one in the country where the issue was brought to the floor of annual conference. This dear older man let me cry my tears of anger and hurt, and completely supported me. He propped me up until I could re-enter the crowd, head held high, and receive support from many of my colleagues and friends, while enduring the stares and whispers of others.

The irony was that we were a small ministry with no openly LGBTQ students. I suspected two of my students had not come to terms with their sexuality. Since we were rebuilding the ministry, not one program had been done on any controversial issues. Every event centered around community building and outreach.

The case eventually went to Judicial Council, and was seen as out of order. I accepted another college ministry job that better suited my gifts and graces, and made certain that everyone knew I was not leaving due to the IRD and its actions.

That day mobilized me more than anything else. Scientific evidence has shown for many years that being gay is not a choice or a lifestyle. I began to have more and more students tell me their stories, especially knowing from their earliest memories that something was different than what people expected. I had more and more students sit in my office, crying and asking if they were really going to hell, because that’s what some Christians had told them. I comforted young adults who had their home churches reject them, and steered them to the handful of churches that would welcome them. I reminded them that God knew them while they were still in their mother’s wombs, and that being born gay was not a mistake or something to be overcome. I told them that I loved them, and that God loved them, and that God had great plans for them.

And yet my beloved denomination, supported by my family for generations, continues to be divided by fear. Even though same-sex marriage is legal in this country, I cannot perform such a union without fear of losing my credentials. Y0ung adults who have felt the same calling to ministry which I have felt have to commit to a life of being alone and denying a core part of themselves in order to fulfill that calling in my church. I defy anyone who adamantly denies these things in our denomination to sit and talk with one of the young people I have known during my years of ministry. Unless he has a heart of stone, one cannot help but be moved by the exclusion, condemnation, and hatred visited upon them by ones who say they follow Christ.

As United Methodists, we incorporate scripture, tradition, reason, and experience into our faith journey. My experience as a pastor and scientific reason has helped me better understand the misrepresentation of scripture (as it has done with issues like polygamy, slavery, or misogyny).

General Conference is currently taking place. This is the body that meets every 4 years to make the guiding decisions for my denomination. The IRD is alive at GC, and the issue of homosexuality is once again being debated. I pray that we will let justice roll down like rivers, and not continue to lag behind our society in doing what is right and Godly. I pray for the time when I will not have one more student come into my office, racked with tears and pain because of how Christians have condemned them. I pray that those who fight against inclusion will truly make the time to sit and honestly listen to someone’s life story that is different from theirs. I pray that my denomination will return to its roots of love and inclusion, and stop making a significant portion of the population second-class citizens who cannot marry or be ordained. As Pentecost approaches, I pray that the Spirit will come down and fill the hearts of the people making decisions which impact the lives of so many people.

In the future, when someone asks about my denomination, I hope I can hold my head high. 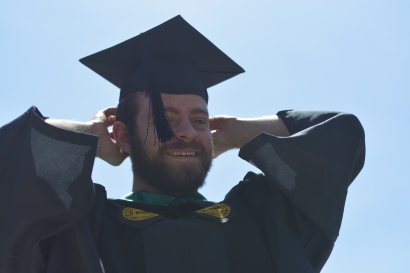 The month of May normally brings flowers after all the preceding month’s showers, but it also brings the annual Commencement activities. Having worked in college ministry for 18 years, I anxiously await the ending of yet another school year. However, this season brings something different. My first born, Caleb, graduated from college this past weekend. It was almost jarring to find myself surrounded by hundreds of other family members and loved ones in mass seating, as opposed to surveying the crowd from my comfortable chair on the platform. Other Commencement days have found me propped in my seat, feet tucked under my legs, and covered by my massive academic robe. I only open and close the usual service with a prayer and a blessing, so I simply enjoy the rest of the service and offer up the occasional good thought for the graduates as they embark on their new lives.

Yet, last Saturday found me slightly shivering in a hard metal chair on damp grass, with no bulky robe to shield me from the early morning mountain air. The tears fought for release as I kept picturing a very tiny, but very loud, toddler running around – not a grown man ready to embark on the adventure of life. Some of the days over the past 22 plus years were quite long, but the years seemed to have flown by. How could we have reached this point?

I am a proud mother of a very wonderful son, and I am ready to let him go to become the man he needs and wants to be. I’ve been letting go since day one, actually. At just a few weeks old, I realized that he oftentimes stopped crying when I placed him in a bouncy seat instead of my arms. He skipped to school that first day of kindergarten, boisterously exclaiming to every neighbor we passed where he was headed. He insisted he could do things by himself, without my supervision or help. He was more than ready to let go my hand and grab the hand of a cute blond girl when the time came. And he was ready to deal with the consequences of any decisions he made which may not have been the best.

The time has come. It’s been coming. He’s grown up and he’s an adult.

That doesn’t mean I have abdicated being his mother. I actually corrected his grammar last week, and we had a good discussion about his reading material now that nothing was required. I’m still his mom, but I’m also his friend. There will be times I will provide unsolicited advice, but I know the decisions are his alone. And if he tells me to keep my opinions to myself, I might have to bite my tongue, but I’ll do it.

Adulthood has commenced. During the activities of last weekend, I heard one student refer to college as being the best four years of one’s life. I beg to differ. I know from my work as a college minister that these years are challenging, stressful, sometimes painful, and fortunately sometimes joyful. I hope and pray that there is more good than bad. Yet, there are so many wonderful years ahead. I want my son, and all graduates, to see that this is just the beginning, the commencement, of life as an adult. That life will include many different emotions, and many times that will be better than the college years. Life is about embracing the good, and enduring and learning from the difficult. I hope each graduate will be ready for some of the best years yet to come.